‘it it ‘arder…
© Barrie Gledden

The 80’s Hair Rock Project is in the bag; it’s mixed and has been delivered to AudioNetwork.

For a few months now I’ve been putting up bits & pieces about a ‘soon to be released’ project for AudioNetwork that we lovingly refer to as the ’80s Hair Rock’.

Barrie has written about the project here – http://barriegledden.co.uk/view-blog/Big-Hair-Rock

I’m writing here because I felt I wanted to say a little, for those interested, about the drums & drum setup, and how I approached the 80’s Rock project as a drummer trying to recreate the authentic 80’s sound.

Listening back now with the changes in recording, mixing & mastering over the past few years… all those old rock records we’d grown up with & loved seemed thin; very reverb heavy & more than anything, just not very ‘rock’. Yeah the drums are loud (relatively) but the guitars were always very thin sounding and I’d never realised just how many keyboards were smattered all over everything.

Our aim, at the outset, was to recreate the sound of all those famous 1980s rock records. Look at what they did but see if we could advance on it with new tech.

I’d kept all my old AKAI sample discs & with the new drum replacer tools available out there, we could trigger the snares & kick drums of the era…..

Pro Tools didn’t exist ‘back in the day’ so editing for the recording engineers in those days involved lots of late nights with a chopping block, chalk & splicing tape. Believe me I know – I’ve done it…

We wanted to use the big 1980s SSL desks too. We’re tried to keep everything authentic at source, yet the new tech would allow us easier sampling, editing and manipulation from start to finish.

One thing we had to bear in mind is that the end user has changed – as in the person who will eventually listen to what we have created & committed to tape. They expect more sonically these days, so presenting them with an 80’s ‘end sound’ might leave them feeling a little deflated. The overall aim was to take the original sounds and make them more current.

Times change and things move on. Sure, drums have been around for millions of years from the earliest form of communication over distance, to the electronic hits of today.

Even from the 80s & 90s, what seemed like a developed instrument (insert gag here) has changed & evolved to reflect technology and trends.

For this specific project, using a modern, shallow depth kit didn’t seem like it would cut the mustard for me… I felt I needed to use the kits they were using at the time; the heads, the cymbals etc. Luckily for me… I had just the thing…

I bought my Pearl Birch Shelled BLX back in 1991. It had already been out on the market for a good few years and I preferred the birch shell over the MLX maple shell for the shorter sustain & sharpened attack it gave.

Looking at it now… With its long lugs & drilled shells for the tom arms, it looks very much ‘of its time’ but the sound still remains. And what a sound…

The kit we used for the 80’s rock album was a stripped down version of the kit I used back in the 90s. It was rack mounted back then & a much fuller kit tom & cymbal wise, but these just weren’t needed for this project – tho they would have looked great for the pictures & video!

Knowing the kit inside out for the last 22 years I knew how well this could sound when really well recorded, and finding the right studio to give us just that sound was imperative. Luckily for us, The Chairworks in Castleford had just had their live room refitted, opening up the space and creating a fantastic room to record in… and it’s pretty much on our doorstep.  They have the big SSL 4048G+ (pre-owned by Gary Barlow)  and extensive outboard and mic selection. We (Barrie) also brought our own selection of mics to help us along.

Richard Lacy was at the helm for the entire session… and what sterling work he did too!

The toms were all mic’d with Sennheiser 421s. Audix d6 on low Tom. For overheads Richard used Neumann U-87s. We used several room mics.  As a ‘near kit’ mic we used Barrie’s AEA R88 stereo ribbon which was put thru the SSL bus compressor & as a general high room mic Richard chose Barrie’s stereo Brauner VM1S.

The drum room also extended out into a further live area where we placed a third U-87 which was put thru a Empirical Labs Distressor.

For the kick, I use a Kick Port on my resonant head which adds additional lower frequencies an octave below the drums typical pitch. We were lucky enuff to have an original NS-10 sub speaker cone already geared up as a sub kick plus the Electrovoice RE-20 right on the edge of the kick port (we moved it after the photos were taken as it seemed to work best right at the point of the highest SPL – the kick port hole).

The snare drum was mic’d with a Shure SM-57 top and Calrec 1000 under the snare. Neumann Km84 hats

All mics went straight thru the SSL channels and associated pre-amps, with a touch of EQ just to help slightly, then into ProTools HDX thru Prism converters.

In 1995, the band I was in at the time, Mother Mary, played a residency of three months over the summer at the Rock Café in Lanzarote.

Whilst there, in our band apartment, I spotted a snare drum shell in the wardrobe. It was in a bad state of repair and had very little hardware; no rims, no skins, few remaining lugs etc. This neglected piece of wood had me intrigued and after asking around, no one knew to whom it belonged or why or how it got there.

Seeing as it had no owner I decided to send it back home to England to see if I could restore it.  There was a little sticker inside which read ‘Property of Siouxsie & the Banshees’ with the hand written ‘0405’ underneath. I’d love to know the history of this thing.

On my return I sent the drum off to Noonan Custom Drums to see what they made of it.

To my surprise and a few quid later I was in receipt of a, what looked as good as, nearly new drum – a Birdseye Maple Tama Artstar snare. It looked & sounded amazing!

I later added die cast hoops for extra ‘crack’ on the rim shots & to save on sticks (eating a pair per gig can get costly, not that it changed anything as hard hitting results in demolished sticks regardless). I also added wider snares; the depth of the drum, at 8 and a half inches, meant that the softer ghost notes where hardly moving the column of air inside the drum to rattle the standard snare.

I have various kits… Acoustic and electric, plus several snares, including my Copper free-floating shell Pearl and brass Piccolo Pearl, but since 1995 the one snare that I love for every situation is this one – The Tama that appeared from nowhere & will probably be buried with me when I go.

Neil Peart walked into a drum shop in the mid-70s and stumbled upon a Slingerland snare drum that he bought for $80 that was then his ‘signature snare’ for the next few decades… I know just how he feels. 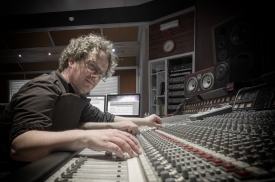 Something’s not quite right… © Barrie Gledden 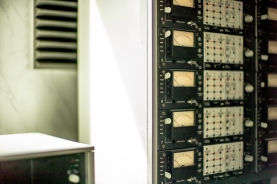 It’s all a blur… © Barrie Gledden

Zildjian 3A American sticks (made for me & personalised by Shaw Stix)

Oh… And a cowbell… Dunno who’s… Dunno what make… In fact… Where did it come from?