That’s right folks – we’re back… and LOUDER THAN EVER!!
A brand new 80’s Hair Metal album, with all the spandex and long hair you could wish for, is released today.

What You Do To Me – Strutting classic rock with massive drums, powerful guitars & male vocals

Hope you find the album as much fun to listen to as it was for us to make!
Thanks for stopping by… 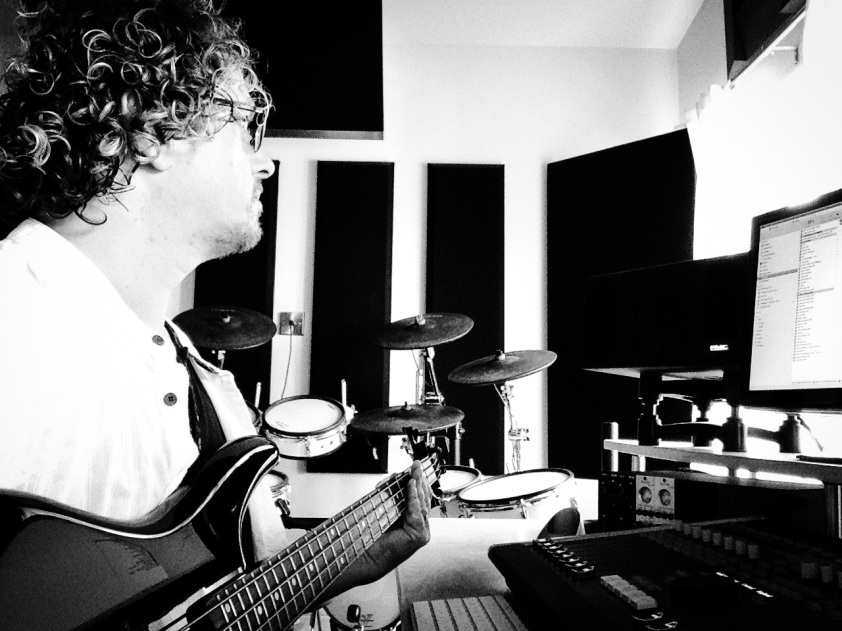 It’s been a solitary month…

Following on from a hectic release schedule, album launch concerts and gatherings, this month sees me locked away in StudiOK working on ideas for new projects.

Whilst many of you are outside enjoying the beginning of a good old British Summer, the humble musician takes to locking themselves away in a darkened room, where the only tan you get is from staring at their computer monitors. It could be deepest Winter out there for all we know…

I do write music on my own, but it’s always more fun to work with others, as they bring along ideas you might never have considered for a project, plus the obvious camaraderie.

This month I’ve been working on tracks for various future albums which will see me busy writing, recording & mixing through to the end of 2014 and beyond.

One of the projects is a Bhaṅgṛā Fusion album with my good friend Prem Joseph. A relatively new style for me, but something Prem has a deep knowledge and understanding of. Prem is a well established Indian music specialist with roots in India and uses India based musicians for his work.

I’m also writing some funky 70’s music with Kes Loy and coaxing Lucy Kimmings into providing some suitably syrupy vocals…
Pop Drum & Bass, Dirt Rock… plus a few others, are also in the pipeline. 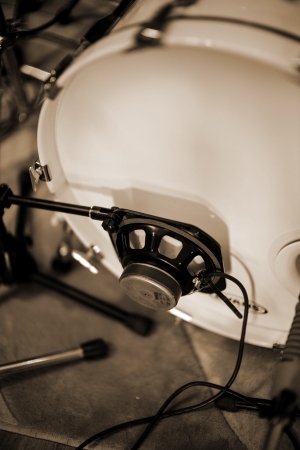 I’ve also been busy with drum session work. Drums are my main instrument (insert gag here) and I play on a good few tracks for others. I’m presently lending my drumming hand to a project with Richard Lacy. Richard has a great approach to music, I’d almost describe it as organic… his songs tend to evolve & develop and it’s always nice to approach his work in the same way he does. It’s very rarely a straight forward ‘play through’… it’s soundscapes and changing kit sounds & textures. Challenging for a musician, but very rewarding.

Here’s an example email from Richard describing what he visioned for a track…
‘It’s a steady 7/8 time. Needs to feel a bit like a 6/8 with an extra beat. I had this idea that in some places, we could move the snare by one beat in each successive bar. ie. snare on 2, then 3, then 4, then 5 etc.’…
I had a slight chuckle to myself when I read his direction… but dya know what? I knew exactly what he was after… It sure beats the old ‘… er… the mix… could you slow it down by 2dB?’

There are a further 3 albums about to be released for AudioNetwork in the coming months, which I’ll blog about when they are available.

SO, a busy time indeed, but I’m not drowning, just waving…

January 2014 started with a bang! Literally…

Towards the end of last year, I started work on a new project for AudioNetwork with Kes Loy & Barrie Gledden. We had so much fun with the 80’s Hair Rock project that the three of us decided to turn our musical attention to something more up-to-date, but still in the rock vein.

Kes, Barrie & I started writing together – thrashing out ideas with live kit & guitars… like we used to do in the many bands we’ve been in. After All, the best songs come from interaction, interplay & bouncing ideas around between the players & writers. As we were writing, tracks were recorded into Pro Tools to enable us to have a record of each section or song whilst the ideas were still fresh in our heads – give it 5 minutes and you can guarantee you can’t remember that great riff you just played, so having it all there to pick and choose from was fantastic. 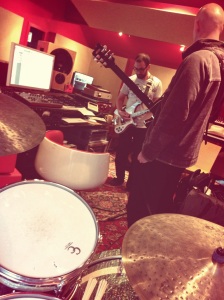 Within a couple of days the tracks were there & formed; writing lyrics and vocal lines came soon after. It’s always a challenge writing lyrics for film & media… there’s a fine line between keeping content ‘within genre’ but also making sure there’s nothing in there that might offend… ‘Explicit Lyrics’ aren’t something you can add and would limit usage from most productions & films.

Following the initial writing sessions, I brought the whole project back to my studio (StudiOK) to set about creating more ‘song-like’ arrangements & laying down guide drums. As we’d not played to clicks when jotting down the ideas into the computer initially, creating something workable to play along to proved a challenge in itself. Even though a good many of the six songs were in common time, some were in interesting time signatures – 6/4 with bars of 7/8 thrown in. I played drum parts with only the music as I imagined it in my head and a click track to keep me where i needed to be.

Having kicked all six tracks into what I deemed full arrangements, I called upon Kes to come into the studio and lay down guide guitars over the new drum tracks.

Barrie added guide bass at his studio before the next stage… REPLACE EVERYTHING!

Even though the songs were now in their finished form and sounding great, the drums had been recorded to thin air & everything needed that ‘live-in-a-room’ feel to have energy & interplay – after all, this is a rock project.

Barrie has a multitude of amps, guitars & outboard gear at his disposal – how could we achieve that smooth & polished guitar sound heard on so many of the latest releases?
Track after track of guitar was added, until what we heard back was the sound we’d been aiming for – over 60 tracks of guitar per song. Thanks to modern technology we can do this and not worry about track count.

Just before Christmas 2013, Iain Angus – lead singer with Four Fighters – came into the studio to record vocals. Initially, Kes & I had sung on the tracks to get the lyrics & vocal lines into the projects, always with a view to being replaced at a later date. Iain has a great rock voice… very much in the style of Biffy Clyro and Dave Grohl – in short, ideal for this kind of project.

It was a long couple of days for Iain. He did take after take, harmony after harmony without faltering or grumbling. My voice would have been in tatters by midday, day one… Sterling work. I did manage a few high harmonies on there myself which, I believe, made it to the final mix.

I initially chose this after comments from a drummer friend of mine ‘That’s how i want my snare to sound’… Warmth of wood but crack of brass.

As with the 80’s Hair Rock album, Richard Lacy manned the desk for us on the session. We ran full passes of each track about 3 or 4 times just to try different fills, beats & ideas. This makes editing a blast, and you can swap between takes to see if a certain fill works better than others as transitions into sections, choruses and verses.

Monday 13th January 2014 saw us splice the ‘most flavoursome’ drum parts together at Barrie’s studio… this was also the pre-mix session; readying the sessions for running out from Pro Tools through Barrie’s ever expanding analogue studio.

Now we had the drum takes set in stone, it was important to re-play the bass along to what we had – the live kit felt full of energy and drive & the bass now needed to reflect this.

The rest of that week was spent, the four of us, mixing the 6 tracks; Barrie taking the helm as ‘Wizard of Oz’.

The mix is the time when you actually realise what you have; what’s been recorded and what’s there to work with sonically and musically. As Geddy Lee said ‘Mixing is the end of all hope’…

The project is now in the bag and delivered to AudioNetwork. Alongside the full tracks AudioNetwork also request underscore & ‘cut-downs’ of our tracks… such durations as 30 second & 60 second versions for use as theme tunes or adverts. Turning a 3 minute song with lyrics into a comprehendible 60 or 30 second version provides a myriad of challenges… but that’s another story… let’s just say, we did it!

Watch out for the Modern Rock Anthems album release in Spring 2014.